An Oil Cooler is a device used for cooling oil; such as engine, transmission or hydraulic oil using a cold fluid, usually water or cool air. But most people don't realise just how many different types of oil cooler are available or the types currently available from Thermex. Oil Coolers have been manufactured by Thermex in England since 1979, since then the range of oil coolers available from Thermex has grown; from the original shell and tube oil coolers to the newer plate heat exchangers and air cooled oil coolers. 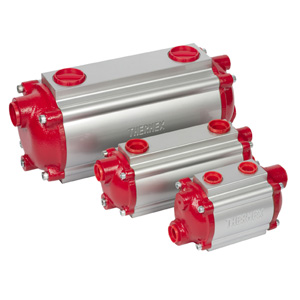 The Shell and Tube Oil Cooler is the most popular product for Thermex and the oil cooler that the company was originally founded to manufacture. The shell and tube Oil Cooler is most commonly used for oil cooling on Hydraulic Power Packs as well as other hydraulic equipment including the hydraulic systems on excavators and earthmoving equipment. The simple and adaptable design of the Hydraulic Oil Cooler however makes it suitable for use on most applications with a fresh or glycol water supply including Engines, Generators and Transmissions. 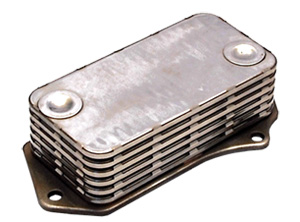 Brazed Plate Heat Exchangers are normally associated with water and refrigerants and are often used in heating installations, but they too can be used as oil coolers. Their compact design makes them a preferred option for engine manufacturers as models like the wash-over plate heat exchanger shown in the picture can be designed as an integral part of the engine, minimising space claim. 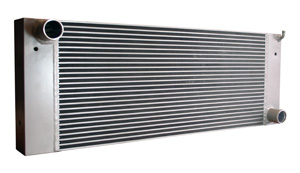 Where there is no permanent source of cool water available, such as on a vehicle or other mobile equipment, an air cooled oil cooler will be required. This uses forced air, either from a fan or the movement of the vehicle, to cool down engine, transmission or hydraulic oil. Thermex specialise in designing combination cooling packs, utilising air coolers, radiators and oil coolers into a single unit.

Thanks to their strong and lightweight plate an bar construction, the air cooled oil coolers manufactured by Thermex are a common sight on earthmovers and excavators. 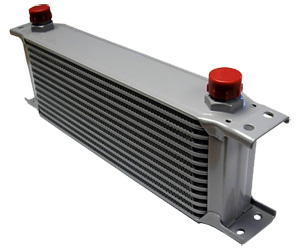 For more information about oil Oil Coolers, or any of our other products, please contact us by using the form below or by emailing us at sales@thermex.co.uk

Shell and tube heat exchangers are our most popular and adaptable product range, suitable for Marine, Hydraulic and Industrial applications.

Heavy duty Air Cooled Heat Exchangers for use with Agricultural, Construction and other Off-Highway machinery.